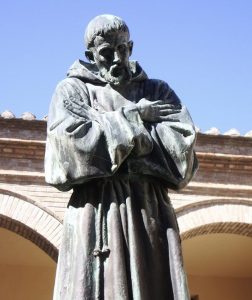 If you feel attracted to our way of life, and would like to know more, we invite you participate in a three month Orientation program — meeting with us on the second Saturday of each month — during which you will have an opportunity to learn more about the SFO, ask any questions you may have, and get to know the members of our community.

Following this Orientation, if you find you are called to be a Secular Franciscan, you may begin a two-phase formation period:

What is the SECULAR FRANCISCAN ORDER?

Are you being called to the Catholic Franciscan Life?

Do you ever feel that you are being called to a deeper relationship with God through the Franciscans?

Do you dismiss the idea because you are married or have to live in the secular world?

If the answer to any of these questions is “Yes”, then read on.

Francis lived between 1182 and 1226. He had a great religious experience when he heard the voice of God from the crucifix in the derelict church of St Damiano in Assisi saying “Francis, rebuild my church which you can see is falling down”. Although at first Francis took the message literally he very soon came to realise that he was meant to bring a freshness of the spirit of love for God, his fellow man and indeed to all creation into a church that needed new life. He was very popular and drew people to follow him. However, many people who had homes and families, also wanted to follow the Franciscan way of life. So Francis established an order for them. Originally known as the The Third Order we are now known as the Secular Franciscan Order and this order, along with the first order, The Friars Minor, and the second order, The Poor Clares, is 800 years old.

Today the world has become increasingly materialistic and unbelieving. Franciscans are needed to take the joy of the love of Christ to people. The message is still of total love of God, our fellow man who, and where, ever he is, and indeed all of creation. A simple message that calls for a simple life, and a reassessment of our values. In this way although the Order is 800 years old the message is modern and for today.

May the Lord bless you and keep you.

May he show his face to you and have mercy on you.

May he turn his countenance towards you

and give you peace.

May they rest in peace.
see full list
Manage Cookie Consent
To provide the best experiences, we use technologies like cookies to store and/or access device information. Consenting to these technologies will allow us to process data such as browsing behavior or unique IDs on this site. Not consenting or withdrawing consent, may adversely affect certain features and functions.
Manage options Manage services Manage vendors Read more about these purposes
View preferences
{title} {title} {title}